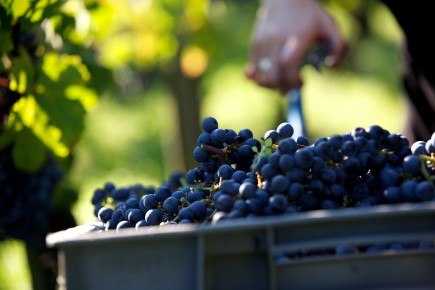 Cool weather until June and a lack of sunshine during the summer suggested that 2014 was not going to be an easy vintage. However, conditions for the harvest were defined by six weeks of sunny, hot and dry weather in late summer which ultimately enabled the grapes to reach optimum maturity.

Picking began with the Merlot on 22 September and ended on 17 October. Unlike the harvest in 2013, which took only nine days, picking lasted nearly a month, which is highly unusual for the region. This was made possible by particularly favourable weather: temperatures reached 25° C or more on 25 days during September. Untroubled by adverse conditions or concerns about the health of the crop, picking was halted and restarted throughout the period so that each parcel could be harvested at optimum maturity.

The grapes were then sorted before being transferred into the gravity-fed vats to undergo alcoholic and malolactic fermentation and pressing. The crop fulfilled all its promise: the Merlot is full-bodied, the Cabernet Sauvignon stylish, structured and powerful, and the Cabernet Franc fragrant and saline.

A few weeks after the harvest, the wine has now been barrelled. The first blending tastings have taken place, holding out the promise of a fine range of aromas and flavours. The Château Clerc Milon winemakers will make the final choice of blend around March.

Our growers are already delighted with the 2014 harvest and look forward to a very good and highly promising vintage.